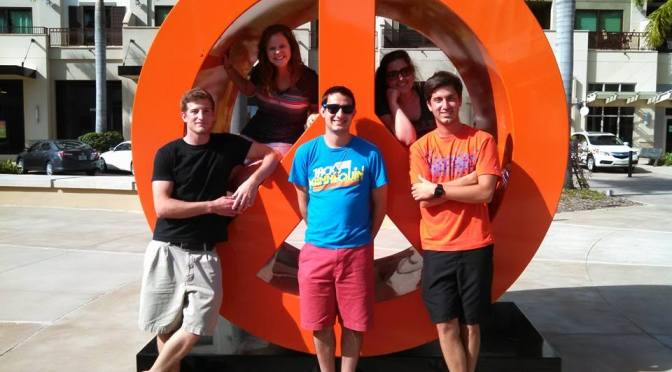 Phew!! It has been a really long/crazy/stressful/awesome week and weekend. Definitely been one of the tougher ones here at summer training but it really did some a lot of great parts as well. We’ve been crazy busy as we pass the halfway point. Can you believe it’s already been three weeks!?

This week started off normal enough with classes about a Catholic Worldview with the one and only FOCUS founder, Curtis Martin.  a worldview is the way we look at life without questioning it. Curtis talked about how important it is to have a Christ-centered worldview and that we have to allow our minds to be transformed so we look upon reality the same way that Jesus sees it. Really interesting stuff thinking about how the current world views things like work. humanity and poverty and how Christ would see it.

Awesome stuff but what really made this week awesome was that it was Apologetics week. For those of you who don’t know, Apologetics is basically the art of defending your faith. How many of you have been approached on campus by someone who challenged your beliefs by firing off bible verses or statistics? I know I have and it was definitely a humbling experience. This week we learned how to dissect those types of discussions and how to practically defend the church’s stance on hot button issues (abortion, scripture, etc.) It was really awesome for someone like me who knew the church’s stance on issues but didn’t really know how to back it up with solid logical evidence. The stuff I learned this week is definitely going to stick with me and be beneficial in the future. Hope I took good notes!

Now I haven’t really written to much about my college. When I say I college I mean my small group. All the missionaries are divided into “colleges” of eight people consisting of both first and second years. We get together throughout the week to talk about how things are going, discuss class topics, have meals, pray and just be brothers. I’m a proud member of the college of St. Benedict.  They’re all awesome guys and they’re definitely going to be long time friends.This week we got together on Wednesday and made dinner for our sister college. It was tons of fun despite having hardly any cooking utensils and everyone had a great time.

This weekend was retreat weekend. As part of New Staff Training everyone goes on one of two retreats. An Ignation Silent Retreat, or a Spiritual impact Boot Camp. On The boot camp retreaters learned more about the Holy Spirit and how he works within us. I actually went on a boot camp last year at CSU and let me tell you, it was crazy amazing. So I decided to do the silent retreat. It was my first time doing one and it was definitely challenging. As a silent retreat everyone did their best not to talk except in mass and spiritual direction. It was interesting that it wasn’t my own voice that I missed but more so I missed everyone else’s. On the retreat we did nine total meditations on different topics that ranged from the creation of the world to Hell, to God’s Mercy. Again, it for sure was a challenge but in the end I feel like I did grow a little and get some grace so I’m thankful I chose the silent route.

Since we were on retreat over the weekend we got today off from classes and just got to hang out. A group of us went to Naples and saw Maleficent. Overall it was alright. Good but I wouldn’t see it again. The best part was getting some Chipotle (taking a break from cafeteria food) and just being around some good friends. Now we’re gearing up for week four. Mission Partner Development is going alright. I’ve been having some issues logging into the focus website and it’s definitely been frustrating. We had our first budgeting class this week and it definitely freaked me out. Turns out I might need to fund raise like $1,000 more than I originally thought. Stress I don’t need. But again, just need to have faith, keep working hard and remember that God will provide. Hopefully I’ll make some more progress this week.

Remember my fellow college mates that I was talking about? Well to finish off this week they crammed all their mattresses into one room for a slumber party. Kind of awesome if I do say so myself. They even built a fort! Now if that doesn’t convince you of how great these guys are, nothing will. Hope they get some good sleep cause we’ve got week four of the soccer tournament in the morning. This week we’ll be talking more about character formation and then starting apostolic formation. Basically moving away from the internal into the external. Summer Training overall is still amazing and I’m learning tons and meeting awesome new people every day. Keep us all in your thoughts and prayers and wish us a good week!

Life Through The Eyes Of A FOCUS Missionary