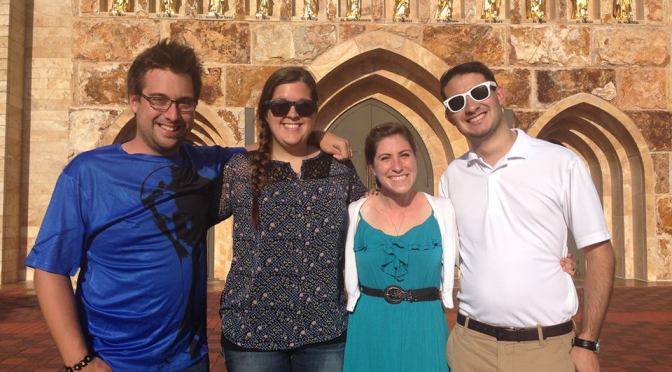 My first year as a FOCUS missionary is officially over and done with. I’m back home in Colorado and enjoying some quality time with my family and friends. Looking back, it’s been a crazy year full of fun, successes, disappointments, surprises, tears, laughs, new friends and lots of Jesus and good times all around.  I mean if you’ve been keeping up with this blog then you know all about all the crazy adventures. With this post I just wanna wrap up the year by reporting on how we spent our last few weeks at Ave.

First thing is the team’s mini vacation up to Tampa for three days for our end of the year off-site. Jason, Corinne, Melia and I took off for some much needed rest and relaxation after a long semester. We stayed at a very nice hotel on Treasure Island. The four of us were looking forward to spending some time off campus and away from students for a few days. We started off our time off by heading to the biggest book store I’ve ever seen. We probably spent a good two hours just browsing the shelves and making our selections. After we left with our purchases we proceeded to head straight to a bar for some drinks and some good food.

After Mass on Day two we spent a lovely day at the Tampa Zoo. As an added bonus, the Zoo was putting on this really cool Chinese festival of lights thing called “Zoominations.” But that didn’t start until it got dark. So after spending the day looking at Giraffes, Elephants, Penguins, Alligators, Manatees and touching some Stingrays, we headed into Tampa in search of some dinner.

We found this really awesome bar called “Fly.” There we had some of the best bar food and drinks I’ve ever had. We also got to enjoy some live jazz music. It was super nice to just relax and enjoy each others company and some good food and drinks. After it got dark we headed back to the Zoo for Zoominations. Now they kind of have something like it back home at the Denver Zoo during Christmas Time but this totally blew it out of the water. I wish I took more photos haha. It was pretty sweet seeing some giant light up Dinosaurs and Chinese Dragons along with all the normal animals.

For day three as a special treat after checking out of the hotel we went to Mass in Tampa at the Sacred Heart Cathedral. Absolutely beautiful Church. I mean I think the Ave Maria Oratory is one of the most beautiful churches I’ve ever seen but I do admit that it was nice getting to go to Mass somewhere different for a change.

After Mass we headed to the Tampa Aquarium. Nothing says fun like looking at fish behind glass…but honestly thought it was pretty cool. We got touch some more stingrays and even some little sharks. It’s been a long time since I’ve been to an Aquarium so it was a really cool thing to do with the last of our time in Tampa. After we finished looking around it was time to head back to Ave.

Once we got back it was right back to work with out final events of the semester. First off was our final Coffeehouse of the year. I was skeptical of how many people would come with it being the midst of finals study time. However, in the end it was a great turnout and we had some really awesome acts perform. The bugs weren’t super bad and there were barely any technical difficulties. I’m really glad that our last big event of the year turned out so well.

A few days after Coffeehouse we held our Student Appreciation Dinner. We invited all of our student leaders and all of those who come to our Bible studies to come share a meal with us. The menu consisted of some amazing pasta and sauce made by Jason, some super fresh salad made by Melia,  and some lovely store bought garlic bread heated up in the oven by me. The food was great but what was better was being able to spend some time with our students before finals got super crazy and everyone got busy. Jason, Melia and I also had the chance to say a few words about our fearless leader, Corinne, since she will be leaving FOCUS. Corinne was a really awesome team director. She was always there with advice when I needed support and was so good at keeping the team in high spirits. She will be missed.

You know who else is going to be missed? Jason and Melia. I am officially the only team member that will be returning to Ave next year. I’m both excited at the idea of 3 totally new teammates and terrified. But I’ll do my best to whip them into shape. And you know WHO ELSE is going to be missed!? All the graduating seniors! I had the chance to sneak into the commencement ceremony to see my favorite seniors walk across the stage to receive their diplomas. Honestly there are some really amazing students leaving Ave this year to move on to bigger and better things. Robby, Alex, Matt, Thomas, Austin, Joey, Ben, Sarah, Kyle, Alvaro and all the rest! i’m so proud of you and thanks for a great year. Can’t wait to see what God has in store for you!

And that pretty much does it for the last few days at Ave. I Just packed up my bags and headed back to Denver! It’s been super nice being home but I forgot how cold Colorado in May can be and I definitely did not pack enough pants. Oh well. I’ll be back in Florida in three weeks for Summer Training Round Two!! Probably won’t post for a while unless some crazy stuff happens. I’ll pretty much just be spending time with friends, family and shopping for a new car. Prayers for that please! Thanks again for a great year Ave and I can’t wait to see what’s gonna happen next year!

Life Through The Eyes Of A FOCUS Missionary